Mario Kart 8 Deluxe has taken the world by storm on the Nintendo Switch. Though there are no new racetracks exclusive to the upgraded version, the game includes all 16 of the original’s DLC tracks. And I have to say, a good number of those tracks are amazing, so it’s great to see them reach a wider audience.

Here is the video version for your viewing pleasure!

Crystal Dragon and I have been enjoying the game together and have been discussing which of the game’s novel tracks are our favorites. We put together a list of the Top 10 Tracks in Mario Kart 8 Deluxe! Note that we didn’t include retro tracks, even though some refurbished courses are fantastic. (Besides, Baby Park would win anyway.) We also didn’t include battle arenas, though we do love that Urchin Underpass based on Splatoon. Now that you know our parameters, enjoy our Top 10!

Kicking off our list is Toad Harbor, a beautiful seaside town based on an amalgamation of San Francisco and New York, which are clearly within driving distance. It’s one of the first really fun courses to play, highlighted by its shortcuts, alternate paths, and steep slope as you make your city escape. The level is also filled with great sights and details in the street signs, posters, and Lady Liberty herself. I would live in Toad’s Harbor, as long as he fixes the highway to get there. 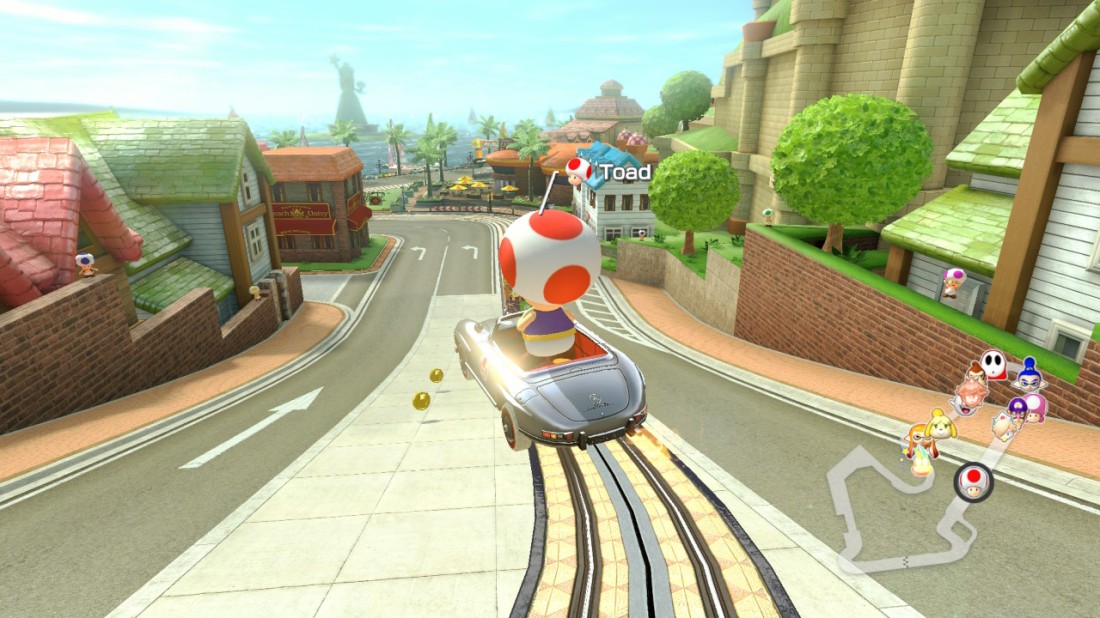 Time for a Mario Party! Not that kind of Mario Party though… I never thought I’d hear Mario and rave in the same sentence, but here we are. The Electrodome is our number nine pick, and it gets us moving to the beat every time. The colorful course splits in the middle, effectively making each lap feel a little different, keeping this party interesting. The whole stage constantly moves around you: Neon light strobes flash in your eye, fireworks are going off, and everyone’s dancing to the music, including the Piranha Plants. I feel like a DJ, spinning beats and making noise on the musical track itself. The Electrodome simply hits all the right notes.

Our number eight pick, Wild Woods, looks like it came out of a fairy tale. The woods are wild indeed, and not just because of its twisty turns. You actually go through the interior of an impressively built treetop village, inhabited by Shy Guys, adorably enough. The course itself is short, but there’s so much to look at in the Shy Guy village that it’s tempting to just hit the brakes and sightsee. Is it just me or does this remind anyone of a certain Nopon settlement in Xenoblade Chronicles? Frontier Village, anyone?

When Mario Kart 8 was first announced for the Wii U, fans were already making the comparison between the game’s new antigravity mechanics and the futuristic high-octane F-Zero series. We still don’t have a new F-Zero game, but at least we have the Mute City track, the first crossover course in our list. This is the best track to show off how awesome antigravity can look in motion; the tracks twist and turn before your eyes, retaining the feel and look of F-Zero. Meanwhile, numerous boost pads placed together near the start helps make it a high-speed race from start to finish. Between the faithful backgrounds and remixed music, the only thing missing is the good Captain himself.

Based on the grueling job simulator where you are forced to slave away under taskmaster Nook… Ahem, based on the relaxing life simulator where you build homes and govern your animal residents, the Animal Crossing track is our number six pick. It appears that one mayor took it upon herself to build a racetrack in her village, and it’s a perfect fit. Throughout the race, you go on a whirlwind tour, where you can eye the various villagers and shops, all while collecting hard-earned Bells throughout the racetrack. What makes this course truly stand out is that it’s actually four different tracks in one; you can play this course in all four seasons. Changes between seasons are minor, mostly limited to small stage hazards and Easter eggs. But the effort taken to make four similar, but slightly different tracks was worth it. Props to the subtle musical elements, like being able to hear K.K. Slider jam when you’re nearby.

I had to do a double-take the first time I saw Dragon Driftway. A Chinese-inspired level with paper lanterns and temples scattered about? And the entire track takes place on a winding dragon? (Gobblegut from Super Mario Galaxy 2) Aesthetics win this round, and this track is nothing short of stunning. It’s fun to go fast in this mostly anti-gravity level, speeding through tight loops and turning every which way. At the same time, it’s hard to resist slowing down to admire all the amazing shrine backgrounds and scroll artwork depicting Kung Fu Lakitu. Speaking of Lakitu, stop telling me I’m going backwards. Just let me admire your art!

Though we’ve already named two other non-Mario series-inspired levels on our list, nothing makes the series feel closer to becoming “Super Smash Kart” than Hyrule Circuit, a track designed after Nintendo’s other widely popular series, The Legend of Zelda. The race path itself is great, taking you through Hyrule Castle and the nearby field, with a remixed overworld theme playing as you cruise along. But it’s all the details that have been fine-tuned for this stage that make it special. You collect Rupees instead of coins, Deku Babas and Keese replace Piranha Plants and bats, and there are nice little extras such as sage medallions on the stained glass and Hyrule guards cheering you on next to the Toads. There’s even a puzzle to solve that leads to a surprise shortcut complete with accompanying jingles. How do you activate it? It’s a secret to everybody.

Cloudtop Cruise makes the top three. It’s a sky-high stage, taking inspiration and even music cues from Super Mario Galaxy. Although I’d say we don’t really have a “proper” Galaxy course, this dynamic stage does a great job replicating that otherworldly feeling. We start off at a giant beanstalk, which quickly leads to fluffy white clouds. Then, in a change of scenery, we enter an airship followed by a hazardous thundercloud, and finally back on the stalk. The whole journey is magical and captures the essence of what made Galaxy special. It’s an exciting course with enough variety and stage hazards to produce close races. 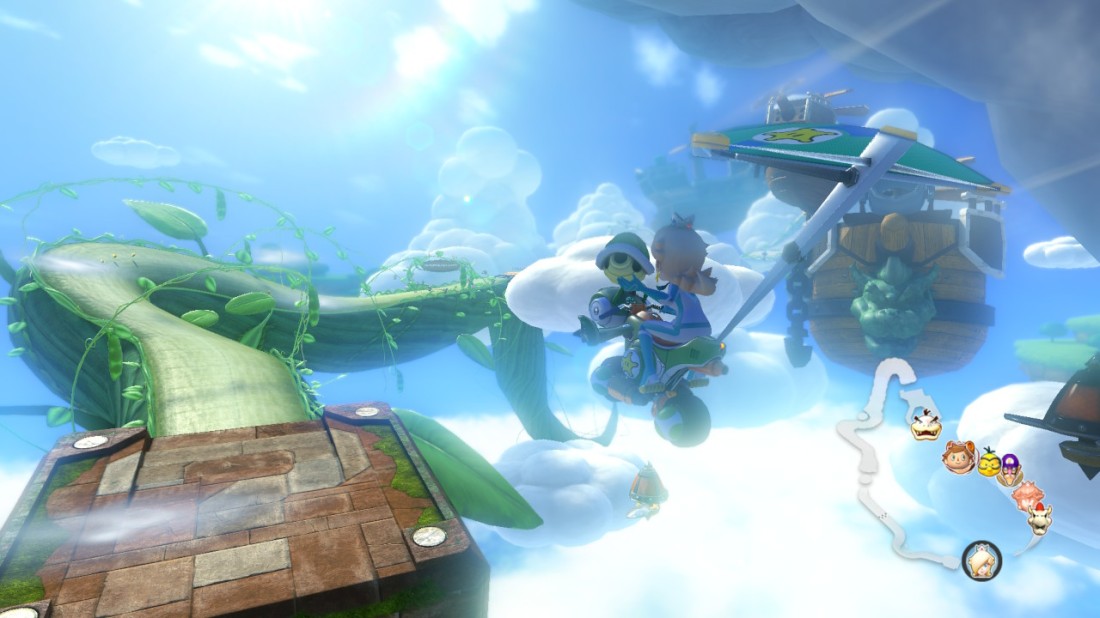 Mario Kart 8 Deluxe graces us not with one, but two whole tracks based on the high-octane racer, F-Zero. And they’re both awesome, evidently, since we put Big Blue as number two. This track has a special denotation as one long course divided into three sections as opposed to laps. Essentially, it’s a high-speed blaze to the bottom, and everything about the stage is designed to replicate F-Zero’s fast pace. Boost pads, conveyer belts, spin boost pillars, and a steadily flowing current are abundant, assuring you hit maximum speed. The entirety of the course utilizes MK8’s trademark antigravity, fitting for the futuristic world. Additionally, the jazz remix of Big Blue’s theme is amazing. The only way this course could have been better is if it were actually in a new F-Zero game for the Switch. Hint, hint? Nintendo?

Here we are at number one. Mount Wario is another single straight course manually divided into three sections. What gives Mount Wario the edge is that the entire track tells a coherent story as you are sent freefalling from a plane at the top of a mountain. You make an actual journey through wildly different locations as you propel downwards, going through a cave, a dam, and a forest. The music amps up considerably as you progress. And the grand finale is what can only be described an as epic final lap speeding down a long ski slope. Huge boosts, flags to drive between, and a final winding path to the bottom are a thrill. As fans cheer, excitement builds up for anyone who can take the gold. It’s an amazing feeling, from start to finish, and the setting is so grand. It’s one of the few levels I can play over and over without getting bored, and I always pick it if it’s an option online. Mount Wario is hands-down my favorite course, not only in the game, but probably the entire series, period.

We hope you enjoyed our top 10 tracks of Mario Kart 8 Deluxe. It was actually tough to choose these, since there are so many awesome new tracks in the game, including the amazing redone retro courses. Needless to say, the game’s track selection is top-notch, and we’re excited to see what Nintendo does next for the series, whether as DLC or for an entirely new game.

Mr. Panda is a lifelong fan of Nintendo. Having started playing video games at a very young age, he has since collected every major Nintendo console and handheld. He even had a video game themed wedding, which featured centerpieces based on Smash Bros. trophies before amiibo was even announced. He loves to share his opinions of games and wants to help you make informed decisions. You can follow him on Twitter @MrPanda2002 and check out his videos at http://www.youtube.com/mrpanda2002. Enjoy, leave feedback, and game on! View all posts by Mr. Panda